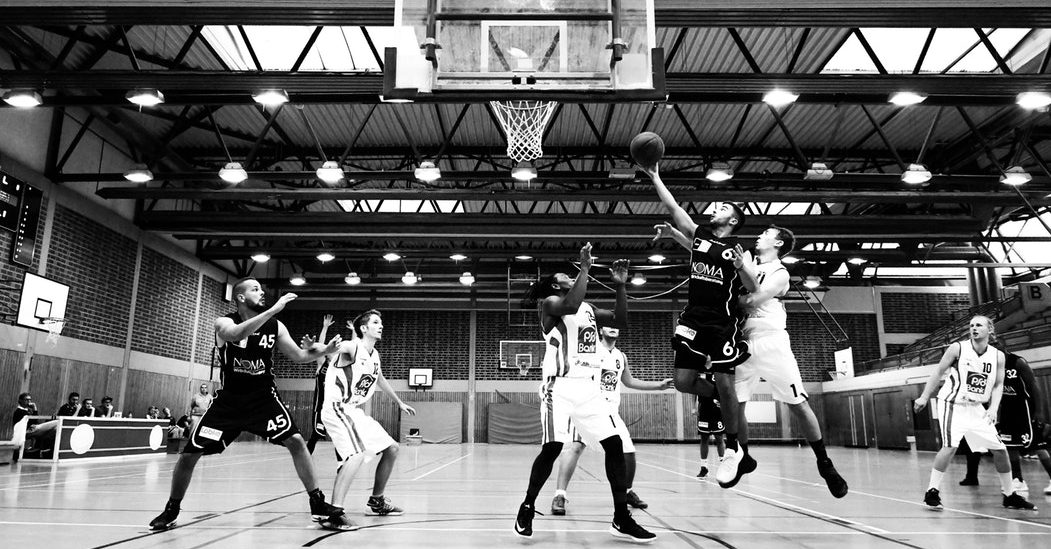 Layups are the easiest shot to make and the most freakishly frustrating one to miss. They are the bane of coaches everywhere on earth.

Picture this! It’s the final minutes of the game. Your on a breakaway with three opposing players hot on your heels. You can smell the sweat pouring off them as they speed closer. Their gaining ground fast. Your thinking a thousand things all at once. “How far behind me are they?”, “Am I going to make it to the net in time?”, “Did I forget to turn off the curling iron?”, “Whatever you do, do not miss, you CAN…NOT… MISS”. You reach the other teams free throw line like a blur. Your hearts pounding and your legs ache with adrenalin. Your ready to score hard!

Then you stop dead, take a moment to reflect, eye the net and take a nice, leisure jump shot getting stuffed in the face by the defense who reached you as you prepared your glorious release.

A LAYUP MAN, A LAYUP! Where was the layup? 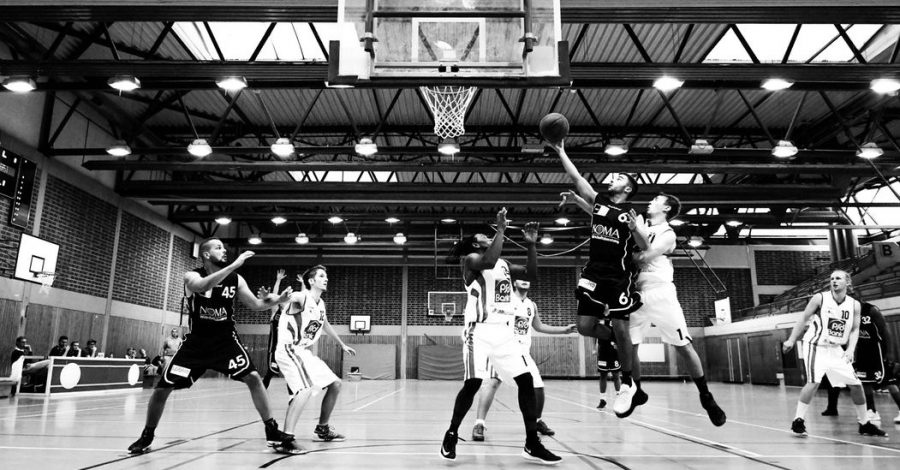 What is a Layup?

The layup is an integral move to the game of basketball. It’s like pepperoni to pizza. It’s the transition between a hard break towards the net and a solid basket. It creates the opportunity to score without giving up your speed and momentum. And it just feels right in that scenario compared to a complete stop-and-shoot.

A layup allows you to transition from a full tilt run to a close encounter with the net. It gives you the opportunity to release the ball with ease and allow it to more gently hit the backboard and reflect into the net. It can also be done by simply rolling the ball overtop of the rim and letting it drop gracefully into the net.

The player runs towards the net and jumps with the ball poised towards the rim of the net or backboard. They essentially use their own momentum while in the air to release the ball out of their hands and allow the ball to flow into the net or to hit the backboard and reflect into the net.

I remember well, learning the layup process by watching others who had it down pat. It didn’t seem hard, yet there was a bit of fineness that went into the move. A mix of rhythm and technique involved in making it look good and making the ball fall properly. I’ll be honest with you, even after a number of years playing ball I still don’t feel my layup is as strong as it should be.

You Don’t Need to Practice Layups

I’ve actually heard a player say this before. Nothing could be further from the truth. Yet how many practices go by where you don’t spend any time focusing on them? Why is it that arguably the most important shot or technique in the game gets almost zero attention at practice outside of a basic warm up? Is it because it just seems too simple a move? Is it because we go in with a coaching mentality that says “If they made the team, surely they must be good at layups”?

Whatever the reason, we need to change our focus from time to time and put some serious work and emphasis into this simple yet extremely effective move.

Taking the time out of practice to explain to the players the fundamentals behind the layup is a great way to increase their understanding of the concept. Studies show that by simply discussing the principles of a new skill with someone greatly increases the possibility of their success. [1]

How to Master the Layup

There are a few key elements that once learned can help take your layup to the next level.

Get the Knee Drive Down Pat 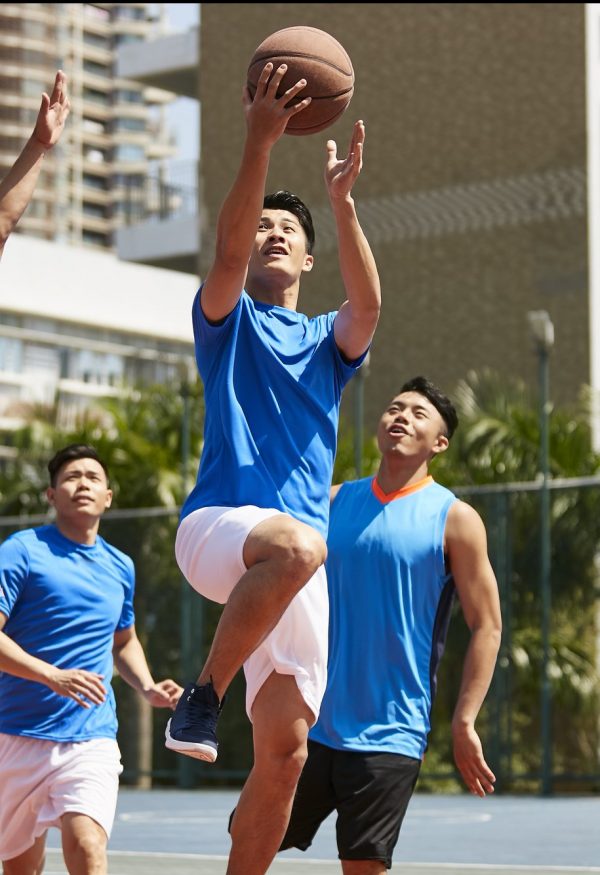 All the power and the main technique of a high quality layup comes from the knee or leg drive. It’s what controls the momentum and gives you the energy needed to get above your opponents and closer to the net. Work that technique until you can do it in your sleep. It needs to be a natural feeling.

How do you know when your proficient with your layup? Rhythm! If it feels smooth, if it feels natural and if it feels fluid you are on the right path. Work the moves over and over until they become part of your game. Work them until your implementing them without thinking.

During your layup use the momentum you’ve built up as you’re flying through the air to propel the ball into the net. Try not to add too much extra release power from your hands. This could cause you to over-power your release allowing the ball to be propelled over the net.

It’s also easier to control the power of your release if you’re holding the ball with two hands as long as possible. At the last minute you can then switch to one hand and guide the ball into the net.

You will not get the rhythm down flawlessly overnight. Practice on your own. Attack the net over and over from every angle until you can make the layup from anywhere in the key.

There is an undeniable connection between efficiency in new motor skills and the repeated practicing of the movements. “Motor skill acquisition inherently depends on the way one practices the motor task.” [2] 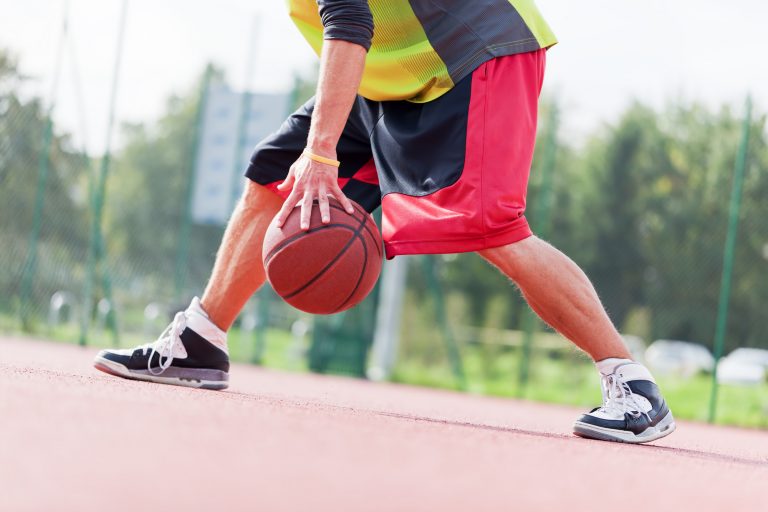 Dribbling practice can help you with footwork and help a new player get used to maintaining control of the ball.

How to Learn / Teach the Layup

Layups should be taught with technique in mind at all times. Sloppy layup footing can stay with a player for a long time so work on getting the technique perfect and then add in a focus on making the actual shot.

If a player has pre-existing bad layup habits when it comes to footwork or focus, have them take things step by step from the beginning. Help them learn it as though they were learning a completely new move and have them practice the move outside of normal training hours. It’s something that needs and deserves the extra time.

Begin with “Knee Drives” to help the players get used to feeling the leg movement required to get good height. Leave out the ball for right now and have the player focus on body movement. The player should start with their right leg behind them and their left leg slightly forward in a bit of a lunge position. Don’t have the left leg too far forward, just a comfortable distance.

This action should give them a feeling of almost lifting off the ground and should be repeated until the player feels comfortable doing it without consciously thinking about it while still maintaining good technique.

Take the ball away again and add a stepping motion into the mix. Most if not all layups are going to include two steps before jumping into the air with the ball. Have the player start by stepping forward with the right foot and then jumping off with the left. The right knee should then drive upward into the layup lifting the player off the ground.

Repeat this increasing the speed when possible and adding the ball release once the player has become proficient. Include a dribble or two just prior to the move.

Finally practice the layup technique in different scenarios that mimic actual game play. Not every layup is going to come at the perfect angle to the backboard in a game so don’t waste too much time practicing the perfect scenario. Practice realistic scenarios. 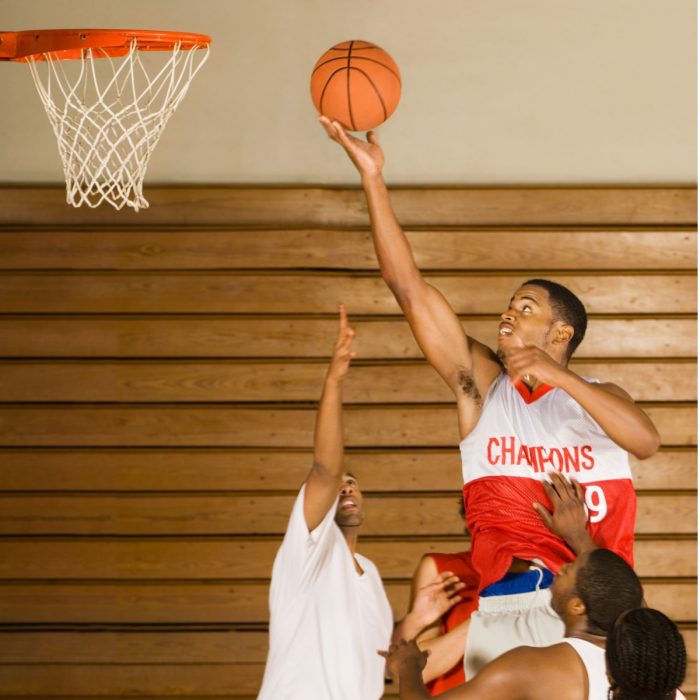 Once you’ve mastered the layup consider this a great time to work on finger rolls. The techniques are very similar with the release being the only real difference. Practice jumping some distance from the net and work on releasing the ball so that it drops effortlessly into the net. If the ball doesn’t roll properly off your hand or fingers you will have a difficult time controlling it’s final fall.

I consider this to be a slightly less-important technique than the traditional layup and other moves that could occupy practice time so encourage players to work on this during personal training.

Although a bit funny, our missing layup from the story at the beginning was not completely fictitious. A sloppy transition from a hard running breakaway to a messy shot on net is a scene played out in games on courts all over the world. Don’t be the guy or gal who’s technique prevents them from taking advantage of a clear path to the net. Make layups a key focus in your practices and outside them as well.